This is the first in a series of posts about the winners of SCORE DC’s 2020 Perfect Product Pitch - Mastering the Art of Persuasion competition with Dara Trujillo, CMO of SLC Group Holdings, a company focused on investing, mentoring, and helping entrepreneurs to grow their business.

Nahum Jeannot has spent most of his adult professional life in and around the food service industry, starting as a line cook in 2007. It was during his time as a head chef in 2015, when the idea of GoOats was first conceived. Chef Jeannot was preparing for the hotel’s grand opening celebration and wanted to include a fun, innovative finger food in his breakfast menu. He considered the oatmeal his mother made for him with milk, butter, spices, fresh fruits and more, but realized a bowl of oatmeal was neither fun, innovative nor a finger food. After mulling it over for a few days (and still thinking about his mother’s oatmeal), Nahum seized on the idea of “oatmeal bites.” 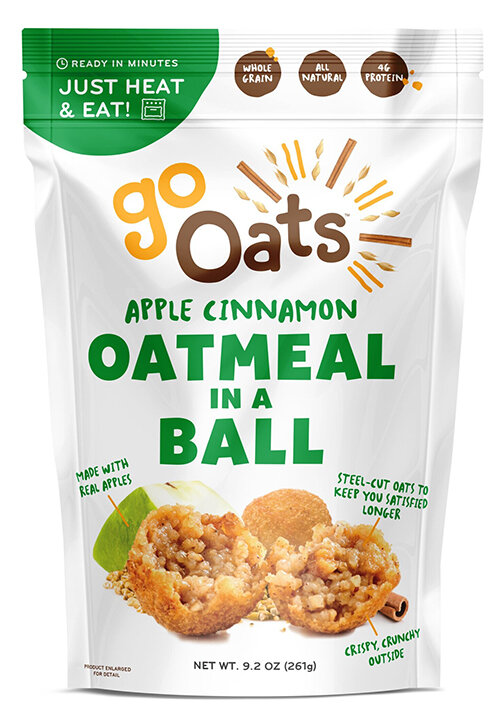 Fast forward, the bites were a hit at the celebration! Nahum realized then that there was “something special” about his oatmeal bites. “As chefs, we create tasty food all the time; it’s our job. But something felt different this time,” Nahum recalled. “I knew…I was meant to share it with the world.” And GoOats was born.

Nahum got to work branding and manufacturing GoOats out of leased food-preparation space in Alexandria, Virginia. Using only natural ingredients, he developed four flavors-- blueberry, maple brown sugar, cran-walnut and cinnamon. Then, with the help of an investor/partner, he secured initial distribution to 13 regional Whole Foods stores, which grew to 60 stores across seven states. The reviews were raving:

Given this initial success, Nahum wanted to expand distribution and was referred by Fairfax County Economic Development Authority to SCORE Washington DC for business mentoring in October 2018. Enter Suzanne McGrath, a SCORE certified mentor with an expertise in the retail, restaurant, food, and beverage-related business. “Nahum’s story is compelling, his product was very original and creative, and his branding was excellent,” Suzanne commented, “so there was a lot to work with there. My biggest challenge with him and my goal for him was to make him more of a numbers-driven manager.” And so, they got to work.

Over the next two years and right up to the day of the pitch event, Suzanne and other SCORE mentors advised and worked with Nahum to develop business operations and sales and marketing strategies to scale the business. “Suzanne was great,” Nahum added, “she coached me for weeks, asked all the hard questions. She even set up a panel of industry vets for me to pitch to ahead of the event to garner feedback.” Nahum was ready and he nailed it.

Dara Truijillo, CMO of SLC Group Holdings, and one of the pitch panelists, had a “gut feeling” that GoOats would be “incredible.” Nahum did not disappoint, and Dara’s hunch was confirmed. “Nahum was all buttoned up,” Dara said, “He had it all -- a retail-ready product with clean, crisp, eye-catching branding that would stand out in the grocery freezer, a very tasty product and a complete grasp of the numbers - cost of product, MSRP, price breaks. It was a no brainer to work with him.”

Since his win, Nahum has worked with SLC Group Holdings setting the groundwork to scale the brand and plan for meetings to present the product line to potential retailers and a key distributor. The pandemic has slowed deals down as grocers stopped onboarding new brands and focused on stocking their shelves with existing products. Nahum is taking it in stride: “Timing and patience is key here. We believe those deals will come back and we will continue to position ourselves for growth….” Mark Dara’s words; GoOats will “definitely be one to watch!”

Update: Nahum Jeannot, GoOats founder, participated in Episode 2 of Shark Tank's 12th season, which aired Friday, October 23, 2020 on ABC. At that time, he agreed to sell a 20% share in his business to Barbara Corcoran, a New York real estate mogul who has partnered with dozens of food-based businesses on the Tank. Watch the episode.

Connie Inukai loved to dine out with her friends, but, at age 68, she had trouble reading the small print on menus and bills in dimly lit restaurants. She was not alone in this... Read more